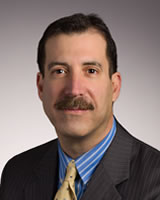 Perry Merlo is a shareholder with the firm. He focuses his practice on the representation of employers and insurers in Workers Compensation disputes.  He has represented employers and insurance companies throughout Pennsylvania over the past 23 years. Throughout his career his clients have included large and small, insured and self-insured, unionized and non-unionized employers from myriad industries, including manufacturers, retailers, national restaurant chains, colleges and universities, and health care companies.

He practiced at the Lancaster branch of a Philadelphia law firm for 20 years before taking his current job as a Shareholder at Lavery Law in Harrisburg in 2014. The past 23 years of his practice have been devoted entirely to the representation of employers and insurance companies in the defense of  Workers Compensation claims.  Mr. Merlo has published 8 articles in the Pennsylvania Bar Quarterly from 2004 to 2013 dealing with Workers Compensation Mental stress claims, Supersedeas Fund Reimbursement, Specific loss claims and Fatal Claims.  He also lectured on the topic of  Workers Compensation on numerous occasions for employers and insurance companies and most recently presented legal updates at the Pennsylvania Career Links in Franklin, Adams and Lebanon Counties.